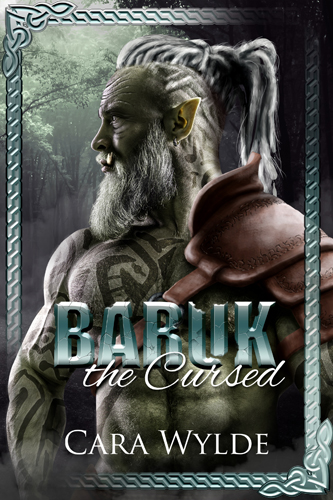 Jenna Cole is done with her family, and the world of humans in general. She might as well become what they all say she is  an orc tribute. She doesnt expect the brutish orcs to welcome her with open arms, especially after shes had to escape from a horde once, but maybe shell have better luck this time. And as beastly as they are, if a captain chooses her as his bride, maybe he wont betray her. Like her entire family did. Maybe he wont shun her, maybe hell see her for who she really is. In the end, thats all she wants: to be seen.

Baruk the Cursed needs a nanny for his twins. His horde has no females, and the only woman hes ever loved is gone. When he meets Jenna at the institute for orc brides, he thinks she looks motherly enough. The twins are suffering after their mothers loss, and the blond, curvy human might just be able to soothe them. As for him Baruk doesnt need anyone. Not anymore. They call him the Cursed because hes always had bad luck. He took a bride once, and now she is no more. He wont risk having his heart torn from his chest a second time.