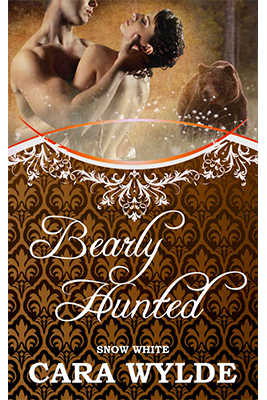 A retelling of Snow White

Nieve has always known her stepmother, the Queen, disliked her. But to go as far as to hire someone to kill her? No, it cant be true Even as the stranger who followed her into the woods steps closer to her, even as she begs him to spare her life, she still cant believe what is happening is real. But it has to be, since the stranger is a bear-shifter. Everyone knows shape-shifters are assassins for hire.

Hunter has one last job to do, and then he will have enough money to take his sister and her children and run far away from this wretched kingdom and his horrible past. Kill her, the Princess. Why? His job doesnt involve asking questions. But, as he prepares to strike, their eyes meet and his world is turned upside down. The young woman is his soul mate. The second he realizes this, he needs to make a decision. Tell her the truth? Convince her to run away with him? Theres no time for any of it, so he settles for the only solution he can think of: kidnap her and deal with the consequences later.

Bearly Hunted is a sizzling hot standalone novella that might just set your Kindle on fire. Intended for readers 18+.