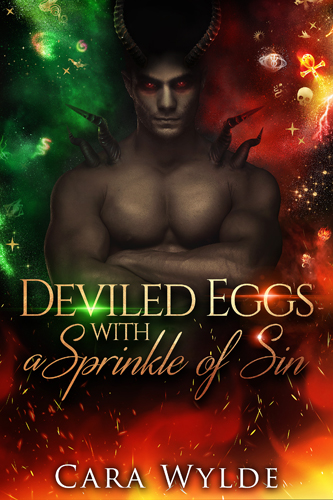 Deviled Eggs with a Sprinkle of Sin

I knew attempting to cook something from scratch was a bad idea. All I wanted was to impress my friends with some homemade deviled eggs. Now theres a seven-foot-tall creature of Hell in my kitchen whos saying Im a powerful witch and that I summoned him. Hes more than happy to ahem devil my eggs, if thats my wish and command.

No. Not a witch, and I definitely dont want a horned and hooved demon, or his barbed tail anywhere near my eggs. Naberius is sin itself, and if I dont banish him quick, Im afraid he might corrupt me.

One problem, though. I have no idea how I summoned him in the first place. It turns out my grandmas recipe book is actually filled with spells, and since no one told me Im a witch, I cant read them. Time to find out what really happened to the women in my family and why they kept me in the dark. It might take a trip to Hell and a contract signed with Naberius, but Ill get to the bottom of it.

I know what youre thinking Is it smart to sign a contract with a demon? No, its not. But hear me out