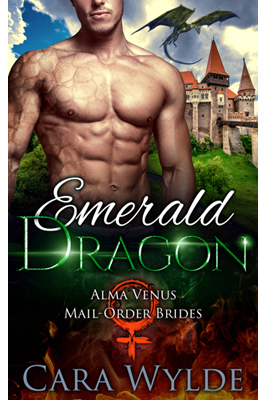 Shy and curvy Jade Summers has almost lost hope she would ever get her happily-ever-after. After all, she was never lucky in love, so why would she be now? She came at the Alma Venus Agency for Mail-Order Brides because she thought shape-shifters made better husbands than human guys. Now, she isnt sure anymore

Dragon-shifter Kaden Grimmr needs a bride. And fast. Hes the Alpha of the Emerald Wing, and he believes its time to divide his fathers clan and take his dragons to a new place and a new future. The problem is that his father, Calder Grimmr, refuses to give him his blessing unless he gets himself a mail-order bride so hed one day have heirs. Kaden has no choice. As much as he hates the idea of mail-order brides, hell have to make a compromise and find one.

He wants a marriage of convenience. She wants true love.

When Kaden messages her and tells her exactly what he needs, Jade wants to refuse him. But hes so tall, hot and handsome that its very hard to say no to him. Maybe, if she takes this one risk, true love will be waiting for her at the end of the road.

Emerald Dragon is a full, standalone novella, with a happily-ever-after, and NO cliffhangers. Intended for readers 18+