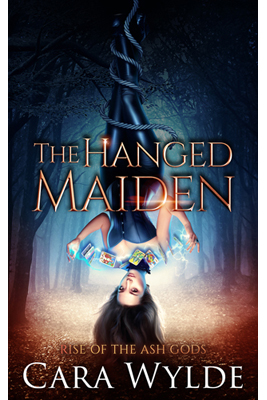 The Hanged Maiden (Rise of the Ash Gods, Book 1)

This was never supposed to happen.

When Valentinas coven is attacked and shes the only survivor, she saves the Suit of Spades, which she is sworn to protect, and flees. Thank Goddess theres a solid protocol in place! All she needs to do is find the Major Arcana, and Keepers who are more powerful and experienced than her will take over from there and protect the Mysteries of the Tarot.

What happens when half of the Major Arcana is destroyed? Valentina doesnt know. There are no protocols. No precedent. Shes lost, but the good news is shes not alone. She can count of her best friend, Piper, a hobgoblin who decided to follow them, and now on this handsome, hot as sin guy who claims hes Loki himself, the God of Mischief.

It could have been worse.

Oh, wait! Its going to be. Because in order to save the Tarot, Valentina will soon have to deal with even more gods. And, it is known, gods are impossible to work with! Mainly, because they hate each other. One witch to convince nine powerful gods to play nice?