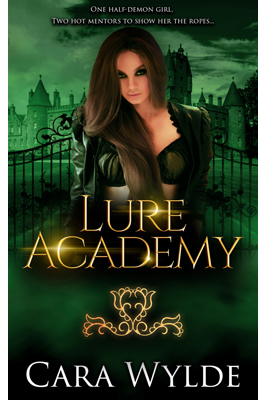 Lure Academy. A place ruled by demons of love and lust. A place where cambions  the offspring of incubi and succubi  come to learn how to control their powers and use them to protect mankind. Lure Academy is the only place that curvy, insecure Sophie can finally call home.

Sophies first day at the Academy is equally exciting and frightening. She will attend the Midnight Ceremony and choose a mentor who will help her tap into her hidden magic. The problem is that the second she meets hot, dangerous Kain and sexy, mysterious Alexi, Sophie realizes it will be impossible for her to make up her mind. What if she chooses both of them? Would it be too much for her, as a young, inexperienced apprentice, to handle?

Kain and Alexi are the best cambions Lure Academy has. Theyve been secretly attracted to each other for months, and now it so happens that they want the same thing: to possess Sophie. Will she bring them together, or tear them apart? Every time the three of them meet, sparkles fly and the air around them becomes heavy with desire.

This book contains M/M and M/M/F action, explicit language and sizzling hot scenes that might set your Kindle on fire. Intended for readers 18+.