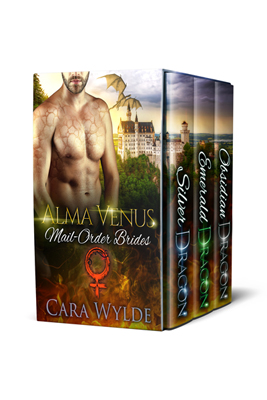 Any human female can marry a shapeshifter, if she wants. When a young woman decides this is the best choice for her, she contacts Alma Venus and goes to live there for a couple of months. She is sorted into the right House and learns the most important things about the shifter faction shes going to marry into. Meanwhile, she starts corresponding with possible suitors.

Silver Dragon  Curvy Andrea Evans doesnt decide to become a mail-order bride because she is looking for true love. Her real intentions lean more toward her future husbands gold and money than to his heart. Sadly, dragon-shifter Calder Grimmr has no idea hes bringing a con artist into his home.

Emerald Dragon  Alpha dragon Kaiden Grimmr needs a bride, and soon. If he wants his father to allow him to take his dragon-shifters with him and rule over his part of Clan Grimmr, then he must prove his devotion to the clan and its legacy. Shy and curvy Jade Summers feels shes not her future husbands first priority, but she follows him anyway. She hopes one day her love for him will make him see her.

Obsidian Dragon  Dragon-shifter Lucian Sutherland awakens after one hundred and fifty years of hibernation only to find out his clan is extinct. His only chance at rebuilding his legacy is to take a mail-order bride. Curvy Natalie Sands has only ever wanted a safe and loving relationship, but shes not sure the dark and broken Lucian will be able to offer her that.

These three steamy novels are standalones, and only intended for readers 18+.