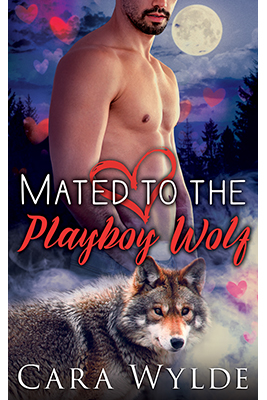 Mated to the Playboy Wolf

After too many emotionally abusive relationships, curvy, shy, heartbroken Tessa Forbes decides to become a mail-order bride in hopes that shape-shifters are not as awful as humans. She leaves her life behind and moves to the Alma Venus Mail-Order Bride Agency to study the shifters culture and traditions. Shes sorted into House Lupi, which means shes more fit for a werewolf, and as soon as she gets her own page in the House Lupi catalog, a hot, hunky, crazy, and totally impulsive wolf asks her to marry him. Tessa is shocked. Arent things happening a little too fast?

Matt is the Beta of the Dark Wolves, pack which belongs to Clan Blackmane. When Valentines Day catches him without a girlfriend, which is unheard of in his case, he panics and makes the craziest move: he gets a mail-order bride. But the mail-order bride system is very serious. Yes, hes horny now, and so in love with Tessa, the curvy beauty who is unlike any woman hes ever been with, but will he still want her in the morning? Being the reckless clutz that he is, Matt doesnt thing about the consequences: he asks her to marry him and takes her away from Alma Venus. Hell deal with reality later.

Mated to the Playboy Wolf is a sizzling hot standalone novella with a happily-ever-after. Intended for readers 18+.