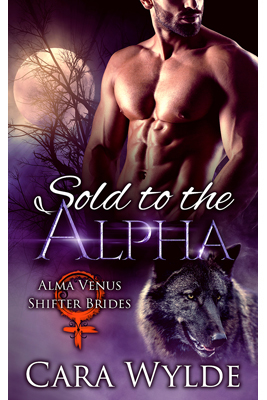 The peace treaty between humans and shapeshifters was signed over a century ago. One of the consequences is that humans must provide shifters with young brides to give them heirs and ensure the survival of their species. Today, all over the world, special boarding schools take girls from orphanages and give them the most exquisite education, preparing them to become brides for the enemy.

Sexy, curvy, and confident, Avelyn is one of those wild souls who will not be traded off as livestock. Shes determined to do everything in her power to gain her freedom and build a new life far away from shapeshifters and what society expects of her.

Alpha werewolf Max Blackmane is in search of a bride. When he comes to Alma Venus Boarding School, one of the best schools for shifter brides in the world, he is set on buying a young woman who would bring him political advantage. When he sees Avelyn, his plans are turned upside down. Shes far from what his clan wants him to bring home, but he cant imagine his life without her.

Avelyn uses every trick in the book to convince Max to buy another bride. It doesnt matter that his perfect body and smooth voice make her weak in the knees. She has a dream, and her dream does not include a wolf-shifter for a husband and a bunch of wolf pups clinging to her skirts.

This is the full, standalone story of sexy, curvaceous Avelyn and her hot Alpha, Max Blackmane. No cliffhangers!

The book contains explicit language and sizzling hot scenes that might set your Kindle on fire. Intended for readers 18+.