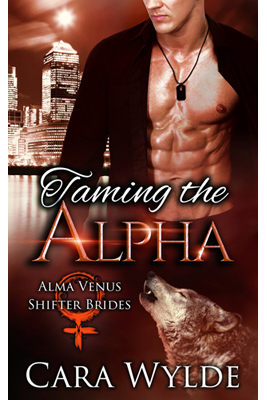 Claudia is one of the last shifter-brides left at the Alma Venus Boarding School who have yet to be bought and claimed by a shapeshifter. Raised and educated to become the wife of a bear-shifter, she is painfully aware that the latest political changes are affecting how shifters choose their brides. Shes afraid no Alpha will ever want her, and if she isnt married by the time she turns 25, she doesnt know what shell do with her life.

Karl Blackmane has never wanted a mate. After what happened during the War of the Six Factions, he isnt ready to love and protect a human. He might never be. But his sister-in-law, Avelyn, insists he should claim her best friend, Claudia, because she is perfect for him. As a favor to Avelyn, Karl makes Claudia his bride. What he doesnt expect is to fall madly in love with her. But she is so innocent and fragile, and he has done so many terrible things He cant let her in, cant let her see who he really is.

Karl keeps pushing Claudia away. Claudia only wants to heal her Alphas wounds Will he find the courage to tell her the truth? Will she be strong enough to forgive him?

Taming the Alpha is a full, standalone novel with no cliffhangers. It contains explicit language and sizzling hot scenes that might set your Kindle on fire. Intended for readers 18+.