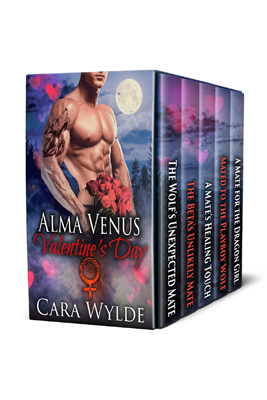 This collection of short stories will give you a glimpse in the lives of your favorite side characters that you met in the Alma Venus Shifter-Brides series. Have you ever wondered whether there was truly something between Jocelyn Blackmane and her Beta, Ryan? What about Kevin, Max Blackmanes Beta? Did he ever find his own true mate?

The Alma Venus Valentines Day collection will answer all your burning questions! Heres what youll find inside:

The Wolfs Unexpected Mate  Kevin is the Beta of the Crescents pack. He never considered taking a mate, until he met Ashley Woods, a sassy, curvaceous beauty who stole his heart. But Ashley is not particularly interested in wolf-shifters. Her life is perfect, and she doesnt need the complications that come with becoming a shifter bride.

The Betas Unlikely Mate  Jocelyn Blackmane is one of the few female Alphas in the world. Even though she is tough and independent, her status doesnt make her life easy. As all female shifters, she is unable to bear children, so its difficult for her to find a mate. When her Beta, Ryan, shows he is interested in her, Jocelyn doesnt know what to do. A relationship between an Alpha and a Beta would only complicate things.

A Mates Healing Touch  Its been ten years since Calebs girlfriend passed away, but hes still heartbroken. His newfound feelings for his best friend, Rosanna, dont make things easier. However, Rosanna is determined to show him he doesnt have to feel guilty for moving on.

Mated to the Playboy Wolf  Matt is the Beta of the Dark Wolves pack. When Valentines Day catches him without a girlfriend, he does something reckless: he gets a mail-order bride. Shy, curvy Tessa Forbes is everything he ever wanted in a mate, but is he ready to commit to a long-term relationship?

A Mate for the Dragon Girl  Sexy dragon-shifter Astrid has never thought she would find a mate in her business partner, James Harington. She belongs to the most ancient and noble shifter species on the planet, and hes only a human. To say they are an unlikely match would be an understatement.

All these stories are intended for readers 18+.